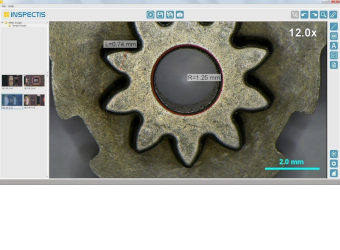 How to Perform Accurate Measurements with Software

Image Distortion. Distortionis a deviation from rectilinear projection. Straight lines of an object don´t remain straight in a distorted image, why measurement accuracy of the object will be affected. Distortion must be controlled in optical systems used for performing geometrical measurements.

Calibration. Accuracy of Calibration procedure you perform in software as well as accuracy of the Calibration Scale you use is directly reflected in the accuracy of your Measurements. A digital picture is a matrix of Pixels (i. e. 1920×1080 pixels if Full HD) with a certain Pixel size. When you calibrate a Magnification in Inspectis, the software calculates Pixel-to-Millimeter ratio for that specific Magnification. This ratio is then used for translating the number of Pixels to Millimeter or Micrometer when you perform geometrical measurements. You can see Pixel-to-Millimeter ratio on status bar of Inspectis user interface displayed as “Calibrated Pixel Size”.

Image quality, Resolution Power. Higher resolution power, means larger number of image sensor pixels but also ability of the optical system (lens) to resolve detail in the object that is being imaged on image sensor. If two points that are close to each other are resolved by optical system and imaged on more than two adjacent pixels, you can measure distance between those points with a accuracy of one (1) pixel.

Image Focus. A sharp picture is required for performing accurate geometrical measurements. Sharp edge of an object which is not in focus is imaged as a blurred edge on more pixels. This is equivalent to having lower Resolution Power.

Accuracy of Operator. Manual measurement of – for example- a distance on a picture is highly reliant on how accurately the start and end points of the measurement line are selected 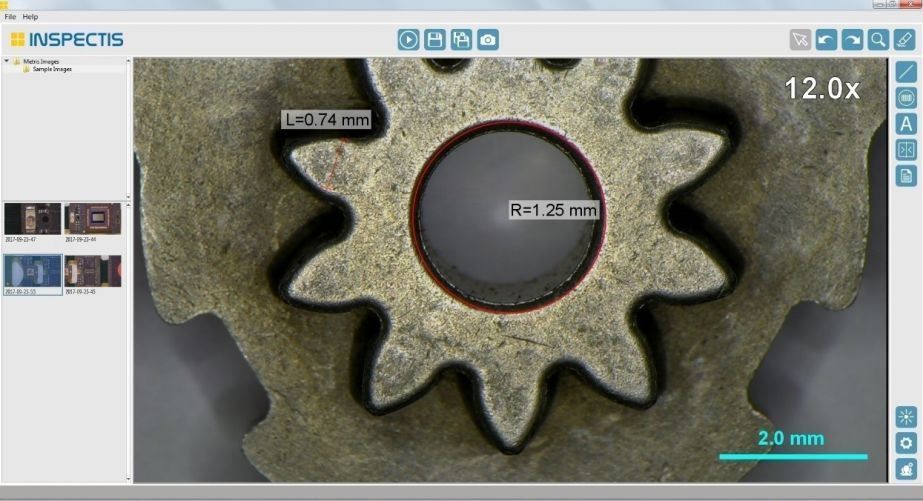 2. Use optics and magnifications with minimum lens distortion or activate “distortion compansation” if your software provides it.

4. Do the Calibration with utmost care! Make sure image of calibration scale is on focus. Put ends of the calibration lines exactly and accurately on scales. Any calibration inaccuracy will be directly reflected to your measurements.

6.  In software use digital zoom to magnify region of interest when performing measurements. Digital zoom will help you to align measurement lines, curves or circles more accurately on the objects you are measuring with higher measurement accuracy as result. 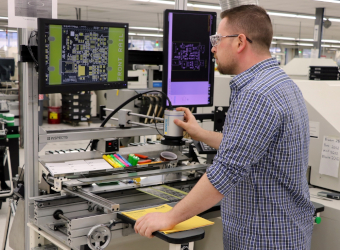 The solution came with the purchase and installation of several INSPECTIS AB HD video camera systems. The outcome was better inspection, as anticipated, but also a 50 percent decrease in inspection time an unexpected benefit.

Whelen Engineering began in a garage in 1952, when George Whelen III invented the first rotating aviation beacon. As a privately owned company, Whelen has experienced growth for more than six decades. The development of that first aviation light helped launch Whelen into the automotive safety lighting industry as well. Whelen currently provides safety lighting for police, firefighters, emergency medical services, and departments of transportation, as well as many other industries.

The production volumes in the automotive sector have allowed Whelen to invest in the latest automated assembly equipment in order to compete worldwide. Last year, Whelen purchased more than 44 million LEDs for use in its extensive family of products.

The company assembles surface mount and through-hole circuit boards and tests them in-circuit. “Our goal is to bring innovative, life-saving products to market more quickly, while maintaining strict quality control throughout the process,” he says. “We have accomplished this through a vertical manufacturing initiative to eliminate or reduce outsourcing, expanding the use of robotics and implementing state-of-the-art production equipment. Perhaps most importantly, we have a motivated workforce of more than 1,500 employees.” Between its two manufacturing facilities, Whelen has a total of 800,000 ft2 (74,322m2) of space.

Until recently, handheld magnifiers were used for first-piece inspection for each run in Whelen’s high-volume, low-mix production environment. After the PCB is printed with solder paste, components are placed with automated equipment and the populated board is reflow soldered. First panels of each production run are inspected to verify
components and correct polarity, orientation, position, and placement accuracy, before the soldering process. The boards undergo AOI after soldering.

In fact, this was nearly an impossible task with the magnifiers. There were four etched characters on the top of each component that needed to be read for verification, plus the polarity. The company needed a better way to inspect the components, including higher magnification, as well as improved image quality and lighting.
After looking carefully at a number of different prospective suppliers, Whelen’s engineers settled on the INSPECTIS F30s with ring light and x/y rail system. The team liked the simplicity of the unit. It was easy for operators to learn to use and had few buttons. 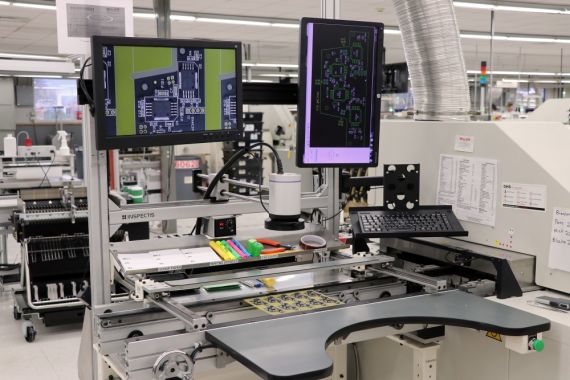 The inspection system is designed to be used inline

“We really liked that it could be mounted inline, rather than having to use it at a separate offline station,” says Blundon. “We were inspecting the parts right as they moved through the line, and we didn’t have to offload or disturb them.” The x/y stand made maneuvering the system easy. The new inspection system was a huge leap forward from the handheld approach that the company had been taking.

The INSPECTIS F30s brings exceptional capabilities and advantages to digital microscopy for SMT electronics assembly, including full HD, 1080p 60 FPS HDMI output, 30:1 zoom optics with autofocus, and a generous practical working distance. Objects under inspection are rendered sharp, clear and large. Its 56x screen magnification on a 24 in. (61 cm) monitor, for example, can be increased up to 200x with auxiliary lenses. 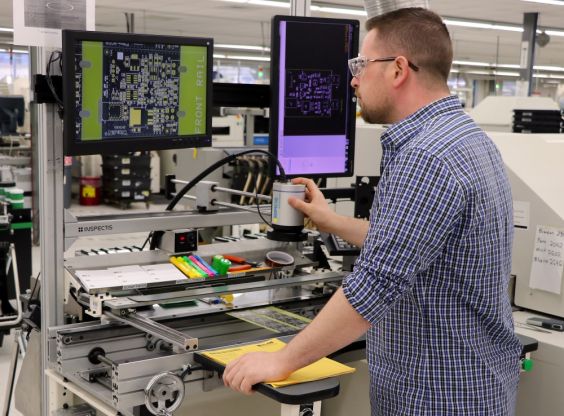 The initial trials and subsequent incorporation into the production line worked so well that rather than just inspecting critical areas and certain components, the camera system is now used to inspect the entire PCB. This is due in part to the system’s large field of view (FOV).

“It’s easier to use and details are much easier to discern, such as the laser etchings on a number of parts, due to the power illumination attributes of the system’s ring light. For these very tiny parts and minuscule details, adequate, controllable lighting is very important. We didn’t have that before,” says Blundon.
Blundon adds that the company’s inspection procedure is much faster overall. “We can use a video capture linked to a Windows computer to simply grab an image right from the system, and then use it for verification, training and more,” he says. “It’s a lot easier and more practical than trying to take a cellphone picture of the screen, and on top of that we have a printable, shareable, high-res image. We can also save and archive the image for future reference and process history.”

“Here in Chester, it’s a low-volume, high-mix environment, so we have a lot of changeover — on average, 15 different assemblies per day, per line.”
That could potentially make any production station a bottleneck, but Whelen’s engineers saw an opportunity where inspection could have been one. Soderberg and Blundon shared similar impressions of the INSPECTIS.

“I’ve looked at a lot of different inspection systems,” says Soderberg. “This was the first one that seemed to be designed and used for inline assembly, rather than as an offline station.”

“The problem is that we panelize, so the monitor on the right has to match up to the image on the board. We call out the fixed rail edge, which stands out on the front rail with the operator, and images within the array don’t always line up with the picture that our system gives us of the prints. What I always stress to the operators is that we’ve set up the monitor on the right to be able to rotated left or right to match up to what they see on the board, sometimes vertically, sometimes horizontally.
On top of that, the tiny components, LEDs, are difficult to see. Using handheld magnifiers to compare images on the left with those on the right wasn’t effective, without the degree of clarity provided by the INSPECTIS.

You need to be able to see the tiny components to compare to the assembly print on the right.”
Soderberg notes that the camera system has helped to speed up his facility’s pre-inspection process by about 50 percent, as well as adding better lighting and imagery, along with a wider FOV.
Whelen values its independence. “As an OEM, it’s part of the Whelen philosophy to make as much of our own product as we can, including the bare boards; we fabricate our own PCBs. This helps us control our quality and stabilizes our delivery schedules,” says Soderberg. “In addition to doing our own board fab, and our own assembly, we make our own cable and wire harnesses, plastic injection molding, and box build. This keeps our overhead lower and allows us to respond to our customers faster and more effectively. We try to source as many of our raw materials and parts from U.S. sources as we can. We’re a firm believer in that, especially with components.”

Contact us for more information or request a demo!